Things have been a bit quiet around here as of late – for which I apologies. Again. This time I blame the sun, making me want to be outside and get out and about and stuff. Anyway, I’m here now and that’s what matters! 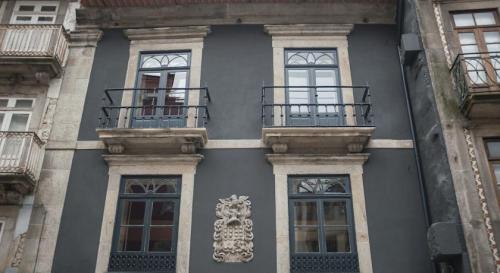 I’ve stayed in – probably – more than my fair share of hotels for a 26-year-old. I’ve been lucky enough to sleep in beds wider than my 6″1 boyfriend is long. A wooden-floored duplex under canvas. Ones themed on chocolate, or the Wild West, or New Mexico – the latter coming complete with crash-landed alien spaceships and half buried, rusting cars. Old and new, big and small, grand and understated.

But none of these buildings were as immediately, incredibly breathtaking as Casa dos Loios.

It’s a good thing one of team members was carrying my suitcase, because I’m pretty sure I would have dropped it in shock. Which probably wouldn’t have been great for either the suitcase, or their beautiful, wooden floors. 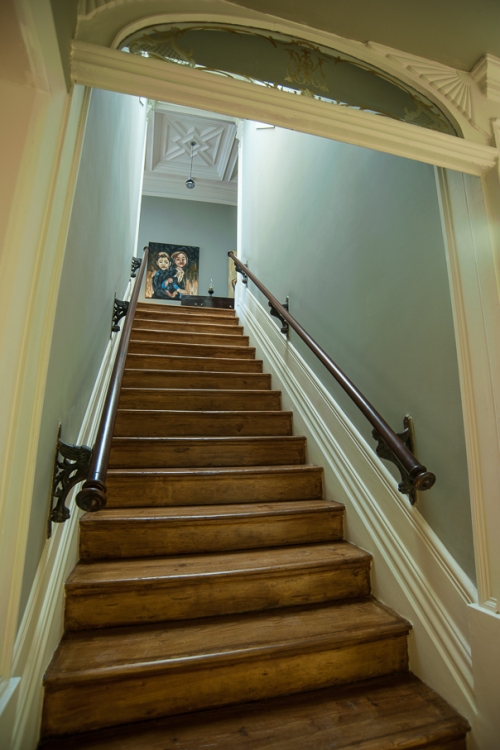 Formerly home to the Ferraz Mello family, Casa dos Loios occupies a 16th/17th-century townhouse in central Porto, resplendent with wide, high-ceilinged staircases, large windows with decorative frames and beautiful plasterwork on the ceilings. (Actually, it slightly resembled (a smaller version of) some of the Trust properties I’ve visited (/worked on the Guidebooks for and seen pictures of)). Complementary furniture, such as an old wireless, is found throughout the two floors – named ‘Ruby’ and ‘Tawny’ after the two red types of the drink for which this city is famous. (Did you know you can get white (‘Branco’) Port? Very nice it is, too.)

Although our room wasn’t quite as amazing, this was because we booked the smallest possible option on a special deal through booking.com – the rack rate of just over £60 wasn’t even advertised on the list in our room, as I think there’s only two of these rooms in the whole hotel. And for the price we paid, it was perfectly adequate, just a touch on the small side and without any of the building features you might find in some of the more expensive rooms. You still get all the other benefits of staying here though, from complimentary toiletries to the amazing breakfast (more on that below).

For example, if you fancy shelling out a bit more (a not-that-expensive-really £120 a night, especially as it sleeps four) then you could stay in this: 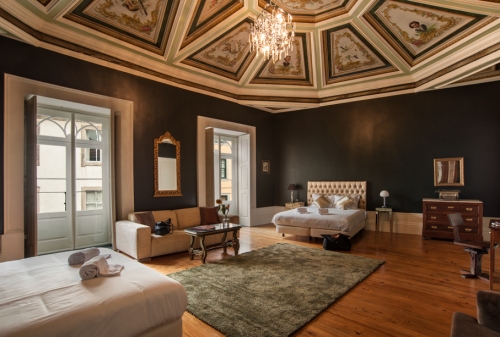 For those looking for something in the middle, here’s a typical double:

Sometimes I find hotels that look so fancy a little intimidating, like the staff and other guests are looking at your like ‘why are you here exactly’? Casa dos Loios is the exact opposite of this. Other guests included a young family, a young group of friends and couples young and old – and all of us were given service as exceptional as the building (and just as impressive too – we heard one person switch languages, seemingly effortlessly, about four times in the course of us eating our breakfast). Casa dos Loios is part of the small ‘Shiado’ chain of guesthouses, and the first one outside of Lisbon. (I like discovering new places, but we were so impressed with Casa do Bairro when we last went to Lisbon in 2011 that we decided to stay there again, and also felt that their Porto venture should be a safe bet.) The ethos is to provide a comfortable, homely place to relax with friendly customer service – and Casa dos Loios definitely achieves that. In fact, I’d even argue that the staff here were even better than those in Casa do Bairro – high praise indeed.

We were sat down, offered a drink and then our host went over the map of Lisbon, recommending places to see, eat and drink based on the amount of time we had and – seemingly – our age (one recommendation – a bar – was prefixed with ‘because you’re young’). They included key tourist sites, but also harder to find miradouros (viewpoints) and some of his personal favourites. In case that’s not enough to keep you occupied, the hotel information binder in the bedrooms also includes tips on places to eat, and a cork board in the dining room features cards brought back from previous guests from places they’d recommend. Both restaurants we went to during our stay were recommended, and neither disappointed (more on those in a Food Friday soon).

The friendly nature of the staff continued throughout our stay – if you popped into the kitchen to grab a tea/coffee/cake (all complimentary) they would chat to you about your day, your plans – but never to the point of being intrusive. There’s also plenty of places to relax outside of your hotel room, either in the dining room or outside in the sun-soaked patio area. There’s no bar, but there is an ‘honesty fridge’ from which you can take wine, beer or soft drinks (though (shh) you’d be better off popping to the supermarket next door).

And then there’s the breakfast. I get the impression that the Portuguese have something of a sweet tooth, because breakfast foods here seem to consist of a lot of home-made cakes and donut-type things. A perfect start to the day in my books. If you’re not into starting your day on a sugar high (why on earth not?!), you could choose from a selection of continental savoury items, fruit or cereal. But I highly recommend going for the cake. Especially the donuts. And then have them again later in the day as an afternoon snack.

The location is excellent too. It’s right on the Rua das Flores, which is full of lovely little cafes, restaurants and specialist boutiques (we particularly liked the one selling products made of cork). You can walk to pretty much all the main tourist attractions in Porto within 25 minutes, and most are much closer – practically on your doorstep. (Though, admittedly, Porto isn’t particularly huge.)

The only minor negative of the hotel might be that the walls didn’t seem particularly thick, and we could hear people in the corridor. However we weren’t kept awake or woken up at any point, so while very light sleepers may have a problem, I have no complaints.

Another thing that didn’t affect us, but might others, is that the entire guesthouse is situated up a – quite long – flight of stairs. I don’t know if there was a lift, so this is something worth enquiring about if you have mobility issues.

If you don’t mind missing a few components of bigger hotels – a bar, restaurant, paid-for movies, nothing I wished we had access to, especially considering you’re in the heart of Porto – then you can’t go wrong with Casa dos Loios. A friendly and relaxing retreat, set in a stunning period building, this is the perfect base for exploring Porto.