I grew up in Oxford. For the first 18 years of my life, the city never seemed to change. Admittedly there were a few restaurants, shops and clubs that you could guarantee would have swapped hands each time you came home from a term at university, but other than that you always knew where you stood with Oxford (usually at Carfax Tower, waiting for a friend running late because of traffic and/or an overdue bus).

Obviously some things always – will always – stay the same. Which isn’t a bad thing; I’m always surprised by how comforting I find the site of the old colleges or passing Christ Church meadows.

The food and drink scene, however, is another story entirely. Every time I come back there seems to be about three new places to try. This time was the turn of Oli’s Thai on Magdalen Road, which had been receiving rave reviews.

Oli’s Thai opened last summer and is a real family affair. Not only is it run by husband-and-wife team Ru and Ladd, who met working a local Thai restaurant (Chiang Mai), but the eponymous Oli is their four-year-old son. I don’t know whether it’s because I knew that before going, but, despite the simple (but nice!) decor, the restaurant also seems to have a ‘homely’ feel that makes it really feel like a family-run business – partly because of the friendly staff, and partly because it’s so small. I think I counted five tables, not including the seats at the bar in the window. Despite this, they hadn’t crammed the tables in – which you might expect considering they were turning people away later in the night – so you never feel like you’re on top of your surrounding diners. 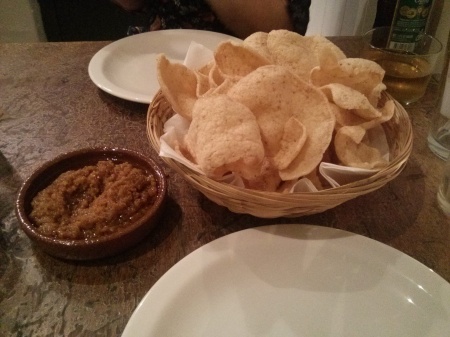 That said, the first thing we actually noticed was the amazing smell. So mouths already watering and stomachs rumbling, we decided to share some prawn crackers to start. These came with perhaps the best peanut satay dip I’ve ever tasted. My friend, K, also had some sweetcorn fritters and chilli sauce. I was forced to try one (all in the name of research and enabling K to eat her main course, obviously). They too were brilliant – really fresh and just the right amount of crumbly. And this is coming from someone who’s not a huge sweetcorn fan. 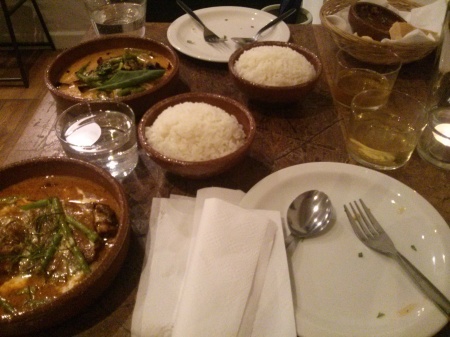 For mains, I went for the duck penang curry (at £10, the most expensive thing on the menu), a leg of duck served on the bone, covered in a tomato-y-coconutty curry sauce and served with green beans. It was amazing. The meat was tender but its skin crisp and the sauce was equally as perfect. K went for the aubergine curry (£7.50), which she said was really, really good. Both dishes came with plenty of sticky, white rice; it was only afterwards I realised how refreshing it was that this was part of the menu price.

Despite the restaurant being full (we booked, which I’d definitely recommend) and their aforementioned having to turn people away, we weren’t rushed at all throughout our meal. And that’s even without us being particularly big spenders – the shared prawn crackers, starter, 2 mains and 2 alcoholic drinks (a beer and a cider) came to just £18 each, including tip.

Overall it was a great evening – great food in a relaxed, friendly atmosphere. Although there may be plenty of new restaurants to try in Oxford, I can see me forgoing them to come back here many, many times.

Photos
1st photo courtesy of TripAdvisor
Exterior photo of Ru and Ladd and second interior photo from Foodie on Tour
Photos of prawn crackers and curries my only, please credit if re-using