by Amy & the world

Being a bit of a feline fanatic, it was inevitable that I’d feel a certain fondness for a city whose name – coincidentally, rather than intentionally – means ‘cat city’. They don’t let you forget it either – Kuching has so many cat statues that Lonely Planet lists them as one of its top sites of interest.

But there’s more to Sarawak’s capital than novelty roundabout decorations. And although many use Kuching just as a base for exploring the many nearby nature destinations, it’s worth spending a few days exploring the city itself. This is the first of a few planned posts about our time here, starting with the first place we (admittedly, probably like most visitors  to Kuching) really visited here, the Waterfront.

This stretch of pedestrianised pavement along Jalan Bazaar has multiple personalities. Until mid-afternoon, it’s restrained and gentle, in contrast to the strains of karaoke that, even before lunch, float across the river. The ideal spot for a quiet stroll and, at lunchtime, to sample some (cheap, tasty and, for some pieces, freshly made – we watched ours be chopped up) spring rolls, chilli sauce and fried bananas from the food carts.

Sunset casts a spell here. The river is surrounded by mosques and their hauntingly beautiful Calls to Prayer collide on the breeze as sampan (boat) drivers glide across the water.

As darkness falls, a different kind of music takes over. Buskers playing every kind of instrument invade the pavements and draw huge crowds. Behind them, families, friends and couples promenade, while others line the walls and steps, chatting. 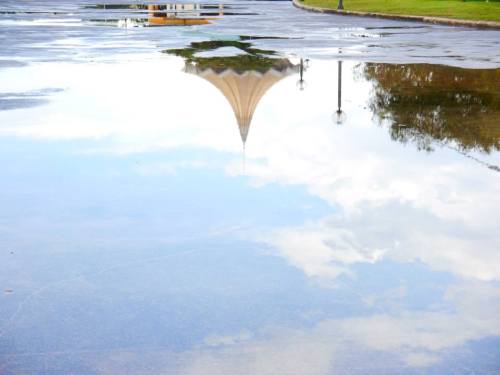 And that’s all without mentioning the changing view as you walk along – colourful stilt houses become the distinctive Astana government building which becomes mountains rising in the background.

All in all, not a bad introduction to the Bornean leg of our adventure.

All photos my own – please credit if using